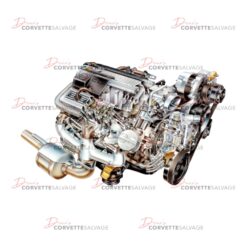 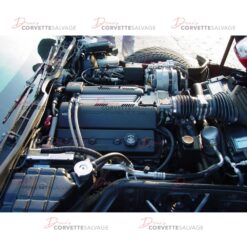 This part is a good, used C4 LT1 5.7L 350CI V8 Engine Assembly which can be installed in any of the following Corvette models:

NOTE: Picture is for display purposes only and does not represent the actual engine you will receive.

The LT1 engine was introduced as the base engine for the 1992 Corvette. This engine produces 300 horse power and 330 foot pounds of torque. At 452 pounds the LT1 is approximately 20 pounds heavier than the L98. It uses a new cooling method, routing the coolant first to the heads and then to the rest of the motor. This allows for higher bore temperatures, less ring friction and more cooling around the spark plug bosses and valve seats. It also includes a lower restriction exhaust system (using two catalytic converters and two oxygen sensors), a high compression ratio, computer controlled ignition timing, free-flowing cylinder heads and a new multi port fuel injection system to increase horsepower. Max. RPM is 5700, a whopping 700 RPM more than its L98 predecessor. An automatic safety shutoff is used to stop fuel flow above 5,850 RPM to prevent damage.