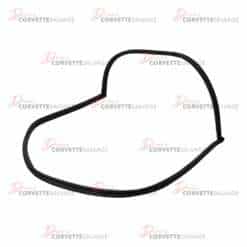 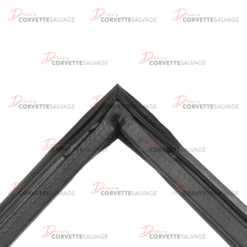 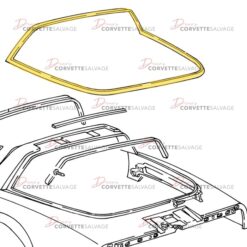 This part is a new, reproduction C4 Rear Compartment Lift Window Weatherstrip which can be installed on a 1984 to 1996 Corvette Coupe.

This part is a new, reproduction C4 Rear Compartment Lift Window Weatherstrip which can be installed on any of the following Corvette models:

General Motors initially made the C4 Rear Hatch Weatherstrip from 1984 to 1996 utilizing two separate pieces that were glued together at the lower corners on a 45 degree angle. This design has shown to be structurally unstable, since the bonds deteriorate and separate during routine rear hatch operation, resulting in air and water leaks at those spots.

This C4 Rear Compartment Lift Window Weatherstrip completely solves the original design issue. The angled corners have been replaced with 1-piece molded corners that are both stronger and more robust. No more whistling from air leaks, and no more damp carpet in the back compartment during a downpour. This product was designed and made in the United States using breakthrough technologies and materials!